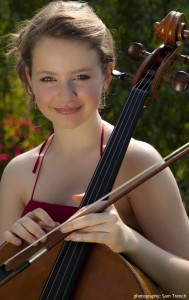 She will be playing at St Marks’ Church, Church Road, Purley on Saturday 20th July 2013 accompanied by Martin Bartlett, himself a keyboard finalist in the BBC Young Musician of the Year 2012.  The programme will consist of three classical ‘cello sonatas: Locatelli, ’cello Sonata in D, Brahms, ’cello Sonata in F, Op. 99 and Rachmaninov, ’cello Sonata in G Minor, Op. 19. The concert will commence at 7.30 p.m. and tickets are priced at £15, £10 (concessions) and £5 for those 18 years old and under or who are in full time education. Tickets may be obtained from me or any member of the POST Committee. Refreshments are included in the price.

Born in Sussex as the youngest daughter of a Swiss father and a Dutch mother, Laura’s musical studies started on the recorder at the age of four. She achieved Grade 8 Distinctions on both ’cello and piano by the age of ten. In 2005 she joined the Junior Department of the Royal College of Music (RCM). Since 2008 she has been a student of the British-Russian ’cellist Leonid Gorokhov and plays a 1911 Celeste Farotti instrument on loan from her teacher.

Laura has already collected many prizes in her young career: 2010, First Prize with Distinction and a special prize in the final of the Swiss National Youth Music Competition; 2011, winner of the Marjorie Humby competition at the RCM; 2011 Beckenham Musician of the year; 2012, Woking Young Musician of the Year.  She has performed in public since the age of 9 and has now a very busy schedule of engagements, which she manages whilst pursuing her secondary education at the Sackville School, East Grinstead. It will be a privilege and an inspiration to have her play for us in Purley.